The ultimate in spin
just got better!

Some of the most exciting new stars of world tennis are at the heart of Babolat’s latest racquet launch, the eighth generation of the Pure Aero.

The racquet range that has become synonymous with Rafael Nadal has been updated and relaunched with a new design and seven new models, but mainly to reflect the way rising marquee names like Carlos Alcaraz, Félix Auger-Aliassime, Leylah Fernandez and others are influencing how players at all levels of the sport are playing.

The new range has emerged from a consumer-centric approach that recognises that there are different spin profiles which need slightly differing racquets, so that everyone can “own their own spin”.

Learn more about the range

Since the early 2000s, Babolat has had three pillars at the core of its racquet development: power, spin and control. The idea is not simply to reflect what tennis players want out of their primary tool; the company worked out more than 20 years ago that spin would become increasingly important in the evolution of tennis, and began developing a frame that would maximise the effect of the strings the family-owned firm has been making since 1875.

The spin pillar has expanded to include footwear. “We have developed what we call our ‘360 approach” says Olivier Carlier, Tennis Group Marketing Manager at Babolat, “a name which reflects the full circle of the racquet in a stroke to develop maximum spin. The ‘360 approach’ combines the racquets, strings and shoes. The adhesiveness of the strings gives the grip that allows for a certain amount of ball rotation after impact, the aerodynamic frame maximises the ability to whip up the ball, and spin begins with a solid footing, as the rotation of the body for the spin starts from the ground – which is why Babolat has put such effort into shoes in recent years.” 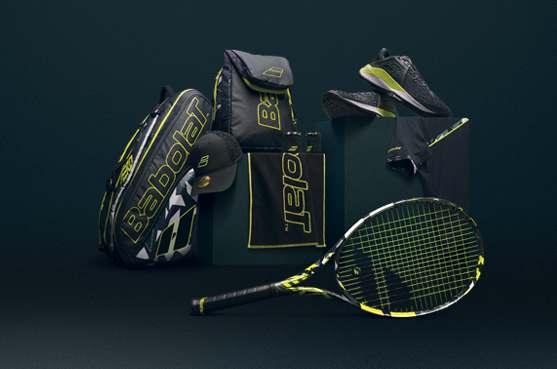 There is an increasing tendency for players to camp on the baseline, which means they have to take the ball on the rise if their opponent hits deep. These players need the spin not just to get extra bounce off the court (or less bounce if they’re playing with slice) and find sharper angles, but to manage the trajectory, as heavy topspin reduces the downward arc of the ball. Players like Alcaraz and Auger-Aliassime play this kind of tennis.

But there are still many players who like to hit the ball at the top of the bounce to maximise their power, but still need the spin to control the trajectory and thereby reduce the risk of hitting long. Such players include Fernandez, Danielle Collins, Jennifer Brady, Benoit Paire and Jo-Wilfried Tsonga, and this type of player is still very prevalent among competitive players in sub-professional tennis.

And then there is Rafa, who is in something of a category of his own, as no-one – with the possible exception of Jack Sock on the forehand – has been able to match Nadal’s consistent spin as measured in rotations per minute. He generally takes the ball just after the height of the bounce, allowing him to stand further back but still profit from a fairly high ball.

The racquet aimed at the baseline campers is the Pure Aero 98. This is effectively the second generation of – and successor to – the Pure Aero VS, a model launched in 2020 based on the Pure Aero but with a slightly smaller head size and various other features to provide more precision (the Pure Drive and Pure Strike ranges also have a ‘VS’ variant).

The other four adult racquets in the Pure Aero range are aimed at those players who look to take the ball at the top of the bounce. They all have a 100in2 head, but there is 15g difference in weight. The Pure Aero weighs 300g, the Pure Aero Team 285g, while the Pure Aero Lite is just 270g. The Pure Aero + is effectively the same as the Pure Aero in weight and balance, but it’s 1.5cm longer for those who like a longer handle. In terms of playing characteristics, the Team and the Lite are almost identical, so it will simply come down to which weight a player feels more comfortable with.

All four have a 16x19 stringing pattern. Nevertheless, the Pure Aero has a slightly narrower pattern while the Team and Lite models have a more open pattern providing more power and facilitating the downward trajectory. The Team and Lite models are aimed at players looking for a racquet to help them to generate spin whereas the Pure Aero is for punchers looking for a bit more control to secure their trajectory.

The visual design of the Pure Aero range of frames is also symbolic. “The design is based around the image of fragments,” says Olivier Carlier, “which is deliberate because we believe the new generation of players will be smashing many traditional notions of how to play tennis, so the design represents the new generation that breaks codes and disrupts.” The traditional yellow remains, augmented with dark grey and occasional white.

Babolat has also introduced natural flax fibres on the new Pure Aero racquet to help reduce the malign vibrations that can cause injuries in the arm, because flax has very good absorption properties combined with mechanical resistance.

The Pure Aero, Team and Lite models combine flax patches on the handle with a slightly different vibration filtration technology on the head. This is a layer of viscoelastic rubber known by the trade name Smacwrap. 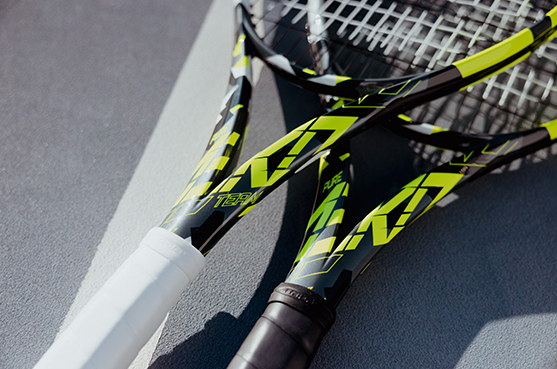 Learn more about the range

Olivier Carlier added, “In developing the new Pure Aero range, we have been totally consumer-centric. We have organised trials with players and focus groups to validate with them the rationale about the playability of our products. We have researched and developed some clear benefits for today’s tennis players, benefits that can be perceived by the players we are targeting, so there really is a Pure Aero racquet for whatever kind of spin a player feels is most suited to their game, and everyone can own their own spin.”

Professional players began using the 2022 Pure Aero range at the start of August when the US Open Series of tournaments began. Many of Babolat’s contracted athletes customise their own racquets, so what they play with has minor variations compared with the racquets sold in sports shops and online.