Nadal and Babolat – an incredible journey over 20 years

As Rafael Nadal lay on the red clay of the Philippe Chatrier arena on Sunday after beating Novak Djokovic, he could reflect on the latest piece of history he has made – a piece of history full of round numbers that forms a perfect way of marking the 20th anniversary of the start of his journey with Babolat. 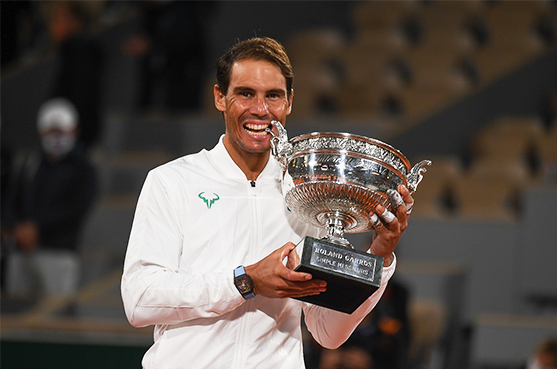 Sunday’s win was Nadal’s 13th Roland Garros and 20th Grand Slam title, secured with his 100th victory at Roland Garros, rounding off a 15-year period between the first and (so far) last of his major titles. After the first of those, a four-sets win over Mariano Puerta to win the 2005 French title, Nadal phoned the staff at Babolat to thank them for giving him the primary tool in his remarkable triumph.

Little wonder the likeable Mallorcan says, ‘However great your dedication, you never win anything on your own.’ A tennis player’s most important weapon is the racquet, and Nadal has been accompanied on his journey by his yellow Aero. But his association with Babolat began much before that memorable day in June 2005.

The young Rafa was eight when Babolat launched its first racquet, the Pure Drive in 1994. A year later the boy was showing such promise that his coach, his uncle Toni Nadal, looked for a better weapon for his left-handed nephew. Because Babolat had chosen Spain as its first market abroad after launching the Pure Drive in France, the racquet was one of the models on show. The fact that it was used by Carlos Moya added status for a sports-mad boy; at the time, Moya was not just an upcoming Spanish player but, like Nadal, came from the island of Mallorca. Nadal tried the lighter version of the Pure Drive, the Soft Drive, and liked it. Thus began his journey with Babolat.

As he grew, Nadal graduated to the Pure Drive, but then made another switch in 2004.

In 2003, convinced that Nadal would be an outstanding player who would rely on his heavy spin to dominate opponents, Babolat launched the first of its racquets to carry the name ‘Aero’. It was engineered specifically for spin. Featuring an aerodynamic section to increase head speed which gave the ball more rotations per minute, it proved perfect for the topspin-heavy game with which Nadal was about to conquer the tennis world. Babolat’s CEO Eric Babolat says, ‘It was key for us to support Rafa and the evolution of the game, that’s why we decided to build a new racquet with a very specific focus on power and spin.’ Nadal adopted it in 2004, the year he played a crucial part in Spain’s Davis Cup winning team.

The early Aero saw him to his first six major titles: four French, one Wimbledon and one Australian Open, plus the Olympic gold medal of 2008. By then it was the distinctive yellow we know today. In late 2009 he started using the RPM Blast, an octagonal structured string with silicone to favour the snap-back of strings and therefore create even more spin. By September 2010 he had won the US Open to complete a career ‘Golden Slam’ and was back at the top of the world rankings.

Since then, in addition of the Aero’s technical evolution, two major changes were made at strategic times to customise Rafa’s racquet for his own needs - well, major by the standards of a perfectionist who pays attention to even the tiniest detail.

In 2011, after six years of uninterrupted progress, Nadal faced a new challenge. With Roger Federer, Novak Djokovic and Andy Murray all in good form, Nadal needed to find something new, in particular ways of countering Djokovic, the man who had taken his place as world No 1. He worked out that he needed to play closer to the baseline, and for that he needed his racquet to put ‘more’ on the ball. Babolat’s customisation team worked on the addition of a sliver of weight tape at the top of his frame to increase the powerful ‘hammer effect’. That added three grams to the weight – in relative terms a big increase.

The result was dramatic. Nadal bounced back to beat Djokovic at Roland Garros in 2012 and 2013, and notably in the US Open final of 2013, a gruelling match that included a 54-shot rally in the second set. By October 2013 he was back at the top of the rankings.

Then after another difficult season in 2016, he asked for an additional two grams, also at the top of the frame. ‘Apart from these strips of weight tape at the top of the frame, there is almost no specific customisation of his racquet,’ says Guillaume Cambon, one of the Babolat technicians who works on Nadal’s frame. The result was a tenth Roland Garros title – the ‘Decima’ –, followed by the US Open title that same year. 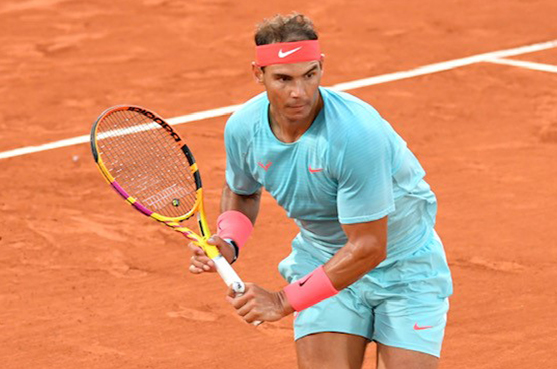 By now, the racquet in Nadal’s hand looked slightly different to the Pure Aero on sale in sports stores, but essentially it was the same. Babolat, working with Nadal, integrated into the racket’s design warm and bold colours that were significant for him: red for the Spanish flag to go with the Aero’s basic yellow, orange to denote the clay, and purple as he feels the colour stands for honesty and integrity. It means the racquet he plays with is distinctively his, but plenty of other players benefit from the same technology and innovations.

Now Nadal has equalled Roger Federer’s record of 20 major titles, and could well exceed it in 2021. Despite the success, he has remained a very humble man, never underestimating opponents, never taking anything for granted, never believing it’s all down to his efforts alone, and never breaking a racquet in anger. Babolat is proud to keep accompanying this remarkable human being on his incredible journey.

Team babolat pro players may play with a customized or different model than the equipment depicted.