2022 – a great year for Babolat in tennis and padel

Athletes with a Babolat in their hand had a phenomenally successful 2022. Numbers one and two in men’s tennis and number one in men’s padel are just the tip of the iceberg – if you look at the big picture, Babolat’s year was highly impressive.

Pride of place goes to the 19-year-old Carlos Alcaraz, who won the US Open to become the youngest-ever men’s tennis world number one, and closes the year at the top of the rankings. Babolat’s other world number one was Juan Lebrón, the 27-year-old padel player from Cadiz who reached 11 finals, winning six of them, and finishes at the top of the rankings for a fourth consecutive time.

Babolat’s Spanish pair of Carlos Alcaraz and Rafael Nadal were the leading players in tennis’ majors. Alcaraz was so dominant in the European clay season that it was a shock when he only reached the quarter-finals at Roland-Garros. But his US Open triumph confirmed his status as the leader of the new generation, and despite an abdominal injury in October his consistency throughout the year meant he held the top spot to the end of the season.

At the other end of the age spectrum, 36-year-old Nadal won the Australian and Roland Garros majors and now owns a record 22 Grand Slam singles titles, adding fuel to the argument that he is that greatest tennis player of all time. He reached the last four at Wimbledon too but couldn’t play his semi-final because of injury.

Eric Babolat, CEO of Babolat, paid tribute to both men. “We have high hopes for Carlos,” he said in an interview, “the potential is there, the characteristics are there. And he has values, he loves the game – that is important for us.

“Nadal is from another planet, but he is still so humble. In Rome, we had our Babolat convention with all our countries, and we had Toni Nadal as a speaker. He was giving examples of when he was coaching Rafa, and followed the same philosophy: we are good, but we want to improve to be better.”

Alcaraz has long been considered a phenomenal prospect, as he combines the power of the modern game with great touch and subtlety. He also has on-court charisma, which manifests itself in the way he shows his enjoyment of remarkable shots he pulls off. That went down particularly well in New York.

An interesting perspective is offered by Antonio Martínez Cascales, who in 2003 took Juan Carlos Ferrero – today Alcaraz’s coach – to number one and from time to time trains and travels with Alcaraz. He said in an interview, “I would go to see the training sessions, and always, in each one, I saw something exceptional, an unimaginable shot. I had never seen this with anyone. It was worth spending two hours there, you saw things from another world.”

Yet Babolat’s tennis year went far beyond Alcaraz and Nadal, in fact the year-end rankings show four Babolat players in the top 11.

Félix Auger-Aliassime began the year known as the man who could reach finals but not win them. When he won Rotterdam in February in his ninth tour final, it released him to break into the top 10 and pick up three more titles in consecutive weeks: Florence, Antwerp and the ATP-500 event in Basel. He finishes the year at six in the rankings.

Denmark’s Holger Rune was thought of as a great prospect, but he really announced his presence in 2022 by reaching the quarter-finals at Roland-Garros at just 19. He then ended the year strongly by beating Novak Djokovic in the final of the Paris Masters, his third title of the year, and ends the year ranked 11. 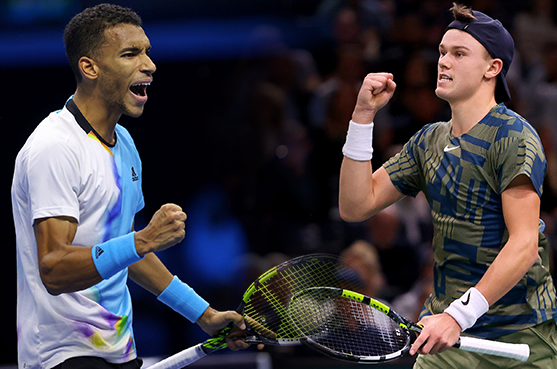 In padel, Spain’s Juan Lebrón was once again the stand-out player. Continuing his highly successful partnership with Alejandro Galán, he won five titles and ended the year at the top of the rankings for the fourth year running. In addition, Argentina’s Virginia Riera closed the year in the top ten and qualified for the Master Final.

Lebrón, who once again showered the tour with his smile, was a big name in the launch of the Premier Padel Tour in April. At the opening in Doha, he highlighted the progress that his sport has made in recent months when he faced the media: “Until today we hadn’t been able to have a press conference of this quality,” he said. “We have to appreciate it.”

Now a legend of padel, Lebrón joins a great Babolat lineage, as his CEO reminds us: “It is also in the DNA of our brand to have champions,” Eric Babolat said. “Suzanne Lenglen, the French tennis musketeers of the 1920s, and Björn Borg all played with Babolat strings.

“We are also constantly looking for the ones coming up. We have about 300 players in the international team under contract, juniors, seniors, ambassadors. At Roland Garros this year you had four players that were 19 years old in the quarterfinals, and we had three of them: Alcaraz, Rune and Leylah Fernandez. This is because we have contact with the clubs and the academies every day.”

The future is bright at the end of a highly successful year for Babolat’s top-level athletes.

‘Without music, I couldn’t be world No 1’ - Juan Lebrón