Rebel Pied Pipers Growing the Game Of Pickleball Across the Nation

Rebel Pied Pipers Growing the Game Of Pickleball Across the Nation

With a booming RBEL yell, Babolat’s pickleball ambassador team went on the march armed with a range of Babolat’s groundbreaking new paddles. These 40-plus pied pipers of pickleball have one mission: to grow the game.

The RBELs were specially chosen by the Babolat HQ to encourage others to try one of America’s fastest growing sports and to promote all things BPKL. It starts with the popular RBEL Power and Touch and RNGD Power and Touch paddles being used on public courts in the park and country clubs by players young and old.

RBELs are boisterous and can’t be missed, outlaws of the widely popular game and dressed head-to-toe in Babolat gear. Some are converted tennis players. Others are native to pickleball. Ty Petty from Knoxville, TN is a former nationally ranked table tennis junior. They invite fellow players to “Join the RBELYON” and encourage them to demo the BPKL product range, including paddles and shoes. 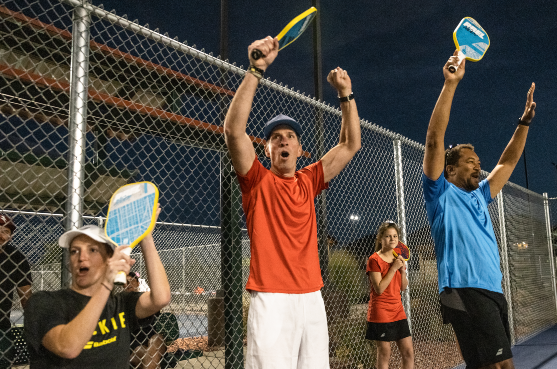 RBELs were not plucked for these plum jobs because they might be the best tournament players, but because they are actively promoting the sport of pickleball on their hometown courts and on social media using hashtags such as #JoinTheRBELYON.

At first, the BPKL project team hatched the idea to have only RBELs officially “Join the RBELYON,” but as the paddles quickly gained popularity around the pickleball courts, others wanted in. Now, any pickleball player can “Join the RBELYON” by choosing to play with a BPKL product, and the RBELs are simply the leaders of the RBELYON. Anyone who is attracted to the

performance, the color, the image, or for whatever reason they decide to play with a BPKL product: they are choosing to “Join the RBELYON.”

The 46-year-old Petty is a 5.0 tournament player who was introduced to the game by his wife, and since then the entire family has joined in the fun. Petty’s brother John is also a RBEL in Georgia.

More Than Grassroots Promoters of BPKL

The RBELs are not only grassroots promoters of the BPKL paddles and shoes, but will provide valuable feedback from other pickleballers and be expert testers on future products.

The energetic and always positive RBELs endorse the BPKL products because they love them, use them, wear them, and win with them. Ty Petty raves about the Babolat shoes and the RBEL paddle, saying it is the most comfortable he has ever used. He said it feels most like the table tennis paddle he grew up playing with.

Petty always has enough demos of the RBEL Power and Touch and RNGD Power and Touch for others to try out. The 2018 US Open 40+ Mixed Doubles Champion, Petty prefers the RBEL Touch paddle for extra spin and enough power when needed. “I’ve used a lot of powerful paddles in the past and some with super control, but I’ve never found one that has the combination that I have now with the RBEL Touch,” he said.

There is no denying the popularity of pickleball. Pickleball has even found its way into pop culture as popular talk show host Ellen DeGeneres raves about her new favorite sport played by her friend Kim Kardashian while on vacation in Idaho. Gonzaga Men’s Basketball Coach Mark Few played intense games of pickleball using the Babolat RBEL with his fellow coaches and players inside the NCAA March Madness bubble.

Sounds like they’d all be a perfect fit to Join The RBELYON.