September is the month kids go back to school... and budding tennis players get back on court! More than 40% of racquets sold worldwide are bought for junior players. All young tennis enthusiasts can count on Babolat: we’re committed to making the game easier to play by providing them with adapted equipment and an innovative learning system.

Since it was founded, Babolat, a French brand that specializes in racquet sports, has put its expertise at the service of everyone who loves tennis. And since the passion for sport begins at an early age and the new generation has the future of tennis in its hands, Babolat pays particularly close attention to the needs of young players.

“The expertise of a brand resides, among other things, in its ability to help the younger generation move forward and to make tennis more appealing and accessible toeveryone. Juniors are one of our priority targets. They represent the future!” says Antoine Ballon, Director of Tennis at Babolat.

In 2018, Babolat began conducting in-depth biomechanical research into the specific body shape and movements of children in order to develop products specially adapted to each age group at each stage of their progress, from beginners to young competitors.

Babolat studied the playing style of kids aged 4 to 12 in France, in partnership with LIBM, the Interuniversity Laboratory of the Biology of Motricity in Lyon. This laboratory observed the behavior of some 200 children for more than six months. Among the study’s many conclusions, one finding really stood out: the handle sizes available on the market today are not adapted to the optimal performance of boys and girls in this age group.

Babolat also formed a partnership with Court 16 in New York, the world’s first tennis club for kids, which shares the brand’s novel approach to the game - one that’s more fun and intuitive. This partnership led to the creation of the Babolat Kids Lab in August 2019 - a platform to observe how children play tennis and a unique testing ground to continuously drive innovation. 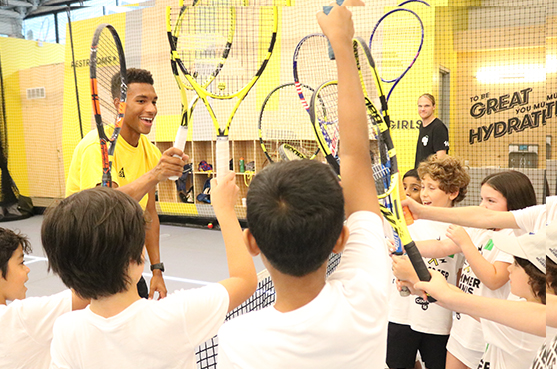 FROM LITTLE CHAMPIONS TO GREAT PLAYERS…

These studies, which build on the recommendations made by Babolat’s global network of instructors and its in-house experts, led to the development of three major improvements in the new junior rackets range: smaller handle sizes better suited to younger players, a more comfortable string pattern that is more spaced out and easier to use, and the design of an intermediate-length racquet.

These changes come in addition to the learning aids we have already developed, including the Memo grip which shows kids where to hold the racquet and the picture of two eyes on the edge of the racquet to teach kids the “ready position”.

When it comes to shoes, Babolat applies the same effort into developing models adapted to the body shape and needs of kids. Babolat makes shoes that are more versatile, lighter, and more comfortable, adapted to each stage in a player’s development. Fitted with more flexible soles and softer fabric, the shoes allow for the natural growth of children’s feet. Thanks to their shock-absorbing heel and “Easy Fit” system that makes it easier for children to slip on, Babolat Juniors shoes play a central role in optimizing performance on court.

Babolat does more than develop innovative products for junior players - it also delivers services to help them discover, improve, and get more pleasure out of their game. French coaches have created 100 educational resources in video format to do just that. Forty videos are already available on babolat.com. And more content will be added soon for even more fun exercises to enjoy with kids.

Since the champions kids admire are also a huge inspiration for young players, Babolat has created some tennis mascots - “mini” versions of Rafael Nadal, Amanda Anisimova and Félix Auger-Aliassime. From an in-store display to help parents choose the right size racquet to visual markers on all junior racquet strings, we’ve come up with lots of ways to give kids a helping hand as they advance in their game.