“The pandemic touched me a lot psychologically, because I spent three months feeling useless.” – Eduardo Ladeveze

Many Argentineans who play padel have built successful careers in Spain, but none has made it as far as Eduardo Ladeveze. Literally. The 48-year-old player and coach is taking padel much further north, almost to the end of the world. The Argentinean wants padel to be a passion in Sweden.

“I am in charge of the professional classes at the Järfälla Pádel Club, plus clinics, event management and team training,” explains Eduardo, who launched himself into his Swedish adventure in the midst of the Covid-19 pandemic.

“I was lucky enough to have offers from Sweden and Dubai, both good, but I decided on Sweden,” recalls the Argentinean, who comes from a country very different in customs and habits to those of Scandinavia.

“Life in Sweden is quite particular,” he says. “It has a climate that I find difficult to adapt to and that leads to a very different lifestyle. But the good working conditions and the excellent work place and group of people make me spend most of the day at the club. Everything is pleasant: I’m surrounded by people who bring me satisfying moments.”

“…and padel came along”

Argentina has provided padel with some of the best players in its history. Many, like Eduardo, started with tennis before switching to padel. There was and still is a lot of talent in the South American country, but the possibilities of progressing in the padel business were and remain in Europe, mainly in Spain.

That’s where Eduardo Ladeveze emigrated to in 2003. “I was coaching tennis, at a high level, and padel came along. I played it alone with friends, for fun, but after a while I decided to dedicate myself to padel and compete. A moment came when I understood that I needed a change in my life. The opportunity to work in Madrid came up, I took it and had an incredible acceptance, and I continued competing at a local level and advancing in my coaching career.”

Eduardo Ladeveze is smiling today, even though he went through hard times. “The pandemic touched me a lot psychologically, because I spent three months feeling useless, without leaving home, unable to bring in money and facing up to the impossibility of producing and feeling alive.”

But that is behind him now, and he is focused on promoting the sport. “I am very proud of my professional growth and the amount of good people I have met through padel,” the Argentinean says. “Padel is a sport with a great future. I think it was lucky to grow in Spain, a country with a lot of tourism. Foreigners got to know it and exported it to their countries. I think it is a sport that in the near future will be a success, wherever it is.”

While Eduardo still enjoys playing, he sees his future as spreading the padel gospel. “After so many years, what I would like is for my work, my teaching and management style to be recognised. I would like to travel the world transmitting my knowledge and experience in the sport. And for my body to allow me to continue playing at an acceptable level, of course.”

Among the good memories he can draw on is having worked in Japan, a country different in many ways to his native Argentina. “It was a wonderful experience. I’ve been lucky enough to travel three times and train there in different cities. Padel in Japan is growing and the people are liking it a lot.” 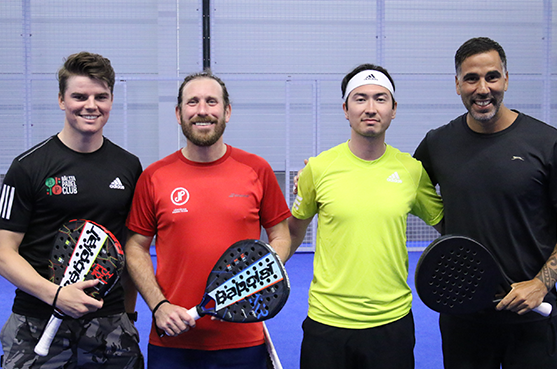 Eduardo Ladeveze has been with Babolat for most of his career, and acknowledges the role played by Eric Babolat. “He helped us grow in Madrid, in the biggest indoor club in the world. For me he was a fundamental part of our teaching work, and personally he helps me to compete in the best conditions.”

And Eduardo’s favourite players feature a number of Babolat players. “I think [Juan] Lebrón has a lot of charisma, as well as the inexhaustible Santo and Bela. But you also have to follow the girls like Patricia Llaguno or Victoria Iglesias. There is a very high level. Today’s pros play with much more power than before, and the fitness is incredible. It’s much faster than years ago.”