“It’s my victory, my loss. I’ll take responsibility for both.” - Sofia Kenin

It is lucky for Sofia Kenin’s opponents that she is the length of a court away when they play her.

An assured 21-year-old who now has a Grand Slam title to her name, Kenin looks at you straight and answers questions with a more authoritative voice than one might expect. Occasionally softened with a quick smile, the answers are quick and to the point. From the prescribed six feet distance as we talk at the Chris Evert Academy in Boca Raton, even the bright Florida sunshine cannot dim the laser-beam brilliance of her hazel eyes.

After a few minutes one is left in no doubt that this is a young woman who has already achieved special things and is itching to get back on court to achieve more.

The coronavirus interruption has, in a sporting sense, been particularly frustrating for her. ‘The virus has slowed everything down, of course,’ she says. ‘After winning the Australian Open I was on a roll. Now, these last few months, the motivation has been sometimes not there. But my Dad helps me with that!’

Alex Kenin, a Russian born amateur player who is sitting a few yards away, has been the driving force in Sofia’s life. After the family moved from Moscow via New York to Pembroke Pines in Florida, he quickly recognized Sofia’s aptitude and hunger for the game and sought advice from coach Rick Macci, who played a similar role in the early days of the careers of Venus and Serena Williams.

‘Rick helped us lay the foundation for Sofia’s game,’ Alex says. ‘Then I watched a lot of matches, studied how people played and took it from there.’ 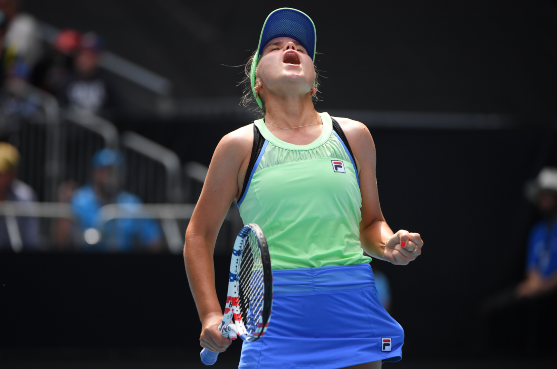 Motivation was not a problem. ‘For as long as I can remember, I have always wanted to play’ says Sofia. ‘I hit the ball hard early on and realized this was the sport for me. As soon as I hit with the Babolat racquet, it felt right for me. I love being part of the Babolat family and have never thought of using anything else.’

Most athletes find themselves choosing between wanting the comfort of winning and losing together in a team or going it alone. ‘I definitely prefer it on my own,’ she replied in a tone that allowed no room for doubt. ‘It’s my victory, my loss. I’ll take responsibility for both.’

After playing junior events all over Florida, Kenin scored her big breakthrough by winning the Orange Bowl, considered the world’s major junior event, at Plantation, Florida, in 2014. ‘That gave me a lot of confidence,’ she says. ‘I played Ingrid Neel in the final and we were both pretty nervous, but I won 6-3, 6-3.”

She was nervous, too, when she lost to her idol Maria Sharapova in the third round of the 2017 US Open, but Kenin clearly relishes challenges and, after beating another tall player, Garbiñe Muguruza to win the Australian title she has proved that lack of height – she is 1.66m (5 ft. 6 in.) – is no handicap. ‘I am faster than the tall players,’ she says. ‘I have more variety, I move them around with slices and drop shots, and I enjoy dealing with pace.’

One feels Sofia Kenin will have a lot more to enjoy in the future.