When one French badminton club decided to adopt as its motto plus qu’une tribu! – more than a tribe! – it wasn’t on a whim. It wanted to make it clear how much the club’s community spirit mattered.

“The motto was partly inspired by the Barcelona football team’s slogan, més que un club – more than a club,” explains Justine Couvidat of the Nozay Badminton Association, a club for all ages founded in 1996 in Nozay, 30 kilometres south-west of Paris.

“But club was substituted for tribu – that’s our nickname, which came about partly because we’ve always been very family-orientated. We really love to put on a big get-together with all the different generations of players and their relatives, even it gets a bit noisy sometimes!”

The Nozay Badminton Association is not just one of France’s liveliest sports clubs. When it comes to performance and player development, it hit the ground running from the moment it started 25 years ago, and has grown with support  over 20 years from Babolat, which has backed the Nozay Badminton Association in a long-term sponsor relationship. Within five years, the dynamic club had produced a medallist at French National Championships level and had team players selected for the French National team.

Justine Couvidat is now the club’s communications officer. A member herself for well over a decade, Justine’s pathway into the club perhaps helps explain its enduring appeal. When first playing there in her early teens on an occasional basis, she found Nozay’s competitive calibre was such that she was constantly taking on top quality players – and simultaneously raising her own game. Factor in Nozay’s welcoming atmosphere and its young, motivated trainers, and Justine was understandably keen to join la tribu permanently. 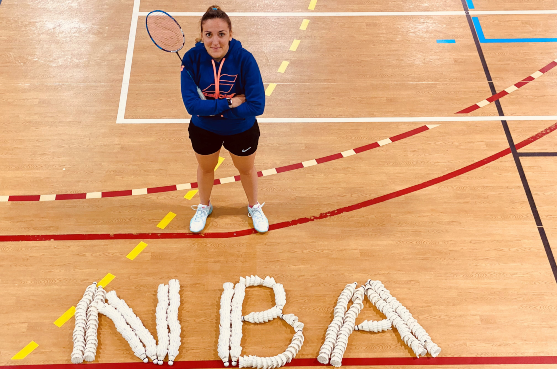 Filling the ‘women in sport’ gap

Nozay has always placed a great deal of emphasis on its female membership, she says. “Players like Audrey Chaillou – who was sponsored by Babolat – and Lauren Meheust, who was a member of the senior national French badminton team, acted as a kind of initial core. Other girls and women, like me, felt encouraged to join.

“Women are not very well represented in sport in general, so in that way, there was a gap to help fill, too. We have also created training sessions specifically for women, and that helps the snowball effect to continue.”

Such is Nozay’s success that, in a town with a population of just 5,000, the club has had up to 200 long-term members, even if the pandemic had its effect on numbers. But – perhaps unsurprisingly for a club that prides itself on its deep-rooted social connections – Nozay Badminton Association maintained its ‘off-site’ video-linked activities throughout periods of social confinement, from fitness classes to quizzes, in a bid to keep collective morale high.

“Once restrictions began to ease in May 2021,” Justine says, “we started up the badminton classes again – at first inside for the younger members, adults outdoors. It was very important to be able to meet up with each other again, to share the training, the competitions, all the good moments. We aren’t called la tribu for nothing!”

That kind of club spirit has helped Nozay overcome other potential challenges, too. “It’s true we don’t have a clubhouse, but after training we’ll often be out there in the car park of one of the gyms we use,  chatting away until midnight. Not just about results or performance, but our everyday lives, too.”

Short-term, the club’s big focus will now be on bringing on a fresh group of the younger generation, what Justine Couvidat calls les mini-bads – junior players aged five and upwards.

Other activities will remain high on the agenda, such as keeping in touch with the broader Nozay town community. That is an integral part of the club’s traditions, with three or four activities a year designed specifically to build up that town-club relationship.

“The stand-out event happens every first weekend of December,” she says, “when sporting associations across France hold annual fund-raising activities for scientific research into rare illnesses. Ours is called la nuit du bad” – badminton night – and last year we put on an activity called blackminton, playing the game with minimal lighting. It went down a storm!”

‘There are so many dimensions to badminton, that’s what attracted me.’ – Peter Mills

'A lot of the things I’ve done in my life are because of sport, because of badminton' - Sylvain Janier-Dubry