“Players take time – it’s a decade or more of investment in terms of time, money, servicing, and energy.” – Jean-Christophe Verborg 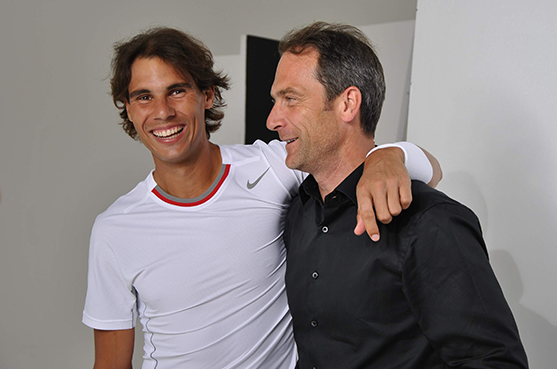 “When we sign Rafa at such a young age and he wins Roland-Garros at barely 19, that’s incredibly quick. But investing in players takes time and the process is getting longer – it’s a decade or more of investment in terms of time, money, servicing, and energy.

“For example, Carlos Alcaraz has developed younger than most, but it’s still been years of specific attention. We want to create relationships with juniors as early as possible so they can have a meaningful and shared history with Babolat. The project is not about ‘buying’ an established player. Carlos was around 10 or 11 years old and the Babolat Spain national promoter invited him to the Babolat Cup to get a feel for the event, and then play the following year. We could see that Carlos was progressing quite well and shortly after worked with his team to officially bring him into the Babolat family of players.

“One thing recently with Carlos was that he was happy with the Pure Aero but he wanted a bit more control. These can be sensitive issues – he’s a young player looking to stay with a brand for the future, so having the right racquet is very important. This was during lockdown in 2020 so it was complicated to bring the product and customization team to his training base as we do in normal times. But we know his game well and we suggested he try the Pure Aero VS. We provided racquets and suggestions on string combinations to try. In the end, he found the perfect combination and switched to the new racquet.

“And here he is now at 18, having made the third round at Roland-Garros and is ranked well inside the top 100. We’re really happy that we’re supporting and working with Carlos. He’s got good people around him and his game has loads of potential. He’s very professional while exuding a real love of the game and love of life. Carlos is a great ambassador for the future.”

What does the future hold?

Like many in tennis, Jean-Christophe believes that in the coming years, the era of the ‘big three’ may end, and with the likelihood that the major titles will be won by a larger cohort of players than in recent years, Babolat needs to ensure the brand has a foothold across the coming generations.

“You need to find charismatic players as they are a spokesperson for the brand,” he says. “Covid has made us think about efficiency – in tennis sports marketing, we are all trying to sign the same names, and it’s going to be tougher than ever. In the 2000s, Babolat wanted credibility in the racquet sector, and wins from our players gave us that. Now we must go beyond just winning tournaments. The players are brand ambassadors: creating memories, evoking emotions, and truly bringing people together.”

But then Jean-Christophe Verborg is also an ambassador. Having tried to sell Babolat racquets in an era when the company was known for strings and not yet for balls, having negotiated deals for Babolat to become an official supplier to, first, Roland-Garros, and later Wimbledon, he knows all about how Babolat is perceived and what Babolat needs from its professional team to keep the company’s name in the minds of tennis players.

“I’m an interface between the players and the brand,” he says. “My job has really expanded over the years – I’ve been lucky to have different positions, and to be part of a company that has exploded in size. Getting to follow and support players over the long term and build up relationships is a very gratifying part of the job.”

‘When I lost, my parents and coaches told me the main reason was the backhand’ - Dominic Thiem

“There will never be another Rafa.
I am Carlos.” – Carlos Alcaraz

Spotlight on equipment used by professional players at the French Open