‘When I lost, my parents and coaches told me the main reason was the backhand’ - Dominic Thiem

In September 2020, the stranglehold of the Big Three was finally broken. After 14 successive Grand Slam titles won by Federer, Nadal and Djokovic – and the previous 41 majors won by just six men – Dominic Thiem won the US Open to announce the arrival of a new generation.

It was a long and patient process getting to the top, and Thiem knew he needed to take some risks. But then he takes risks already – like tearing down a mountain at up to 70 km/h (43mph) on a pair of in-line skates.

‘I’ve always loved in-line skating,’ says the Austrian who was ranked third in the world in March 2020 when the global tennis circuit was suspended due to the Covid-19. ‘The problem was there was no time, but when lockdown came there suddenly was time, so during the months when tennis didn’t happen, I became a good in-line skater. It gives a lot of stability in the legs, so it may even help my tennis.’

Coming from a country with wintersports in its DNA, it shouldn’t be surprising to know that Thiem took to the mountains with his skates. ‘I think it’s pretty dangerous,’ he admits, ‘I reach 60 to 70 km/h, but so far I haven’t had any accidents. I have good control.’

2020 has proved to be Thiem’s breakthrough year. He finished 2019 playing a high-quality final at the ATP Finals in London, and began the new season by reaching the Australian Open final, where he took Novak Djokovic to five sets. But with his favourite clay approaching, medical events took over, tennis disappeared, and patience became a sought-after quality.

But then Thiem is used to being patient. At age 11, his coach Günter Bresnik decided that problems with his backhand would only be resolved by switching to a one-hander. ‘For a while I hit the one-hander in practice and then hit the two-hander in matches,’ he says, ‘but then we decided I’d go for the one-hander in a tournament match.’

The switch was an act of faith. Thiem was always Austria’s No 1 or 2 as a junior, but with the new backhand he lost so often he slipped out of the top 10 in his age group. Yet his parents and coaches stuck by him. 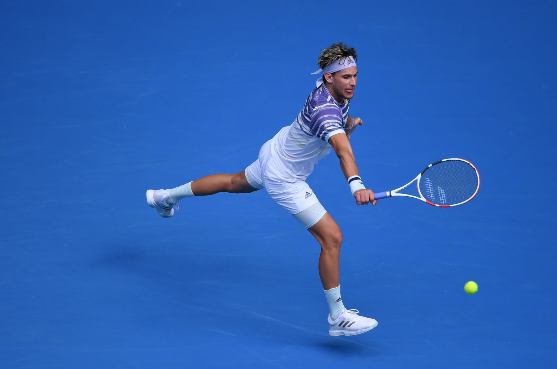 ‘It was very tough for the first year,’ he says. ‘It was a completely new shot, so I lost many matches. After a year I started to win again, but it took one-and-a-half to two years to get back to the top . The trust was always there that it was the right decision. When I lost, my parents and coaches told me the main reason was the backhand, it would take some time and I had to be patient.’

The experience has made Thiem philosophical about the merits of the one-hander and the two-hander. ‘If you are at the top already, the one-hander has a lot of advantages – you hit great slice, good volley, you have more reach, but to get to the top 100 or top 50 I think it’s a bit easier with two hands.’

Thiem has been with Babolat since the start of 2015, and his racket and strings have evolved with his game. ‘I have a lot of power from myself and my strokes,’ he says, ‘so I need a racket that gives me a lot of control and stability, and that’s exactly what the Pure Strike gives me. Until about a year ago I never felt I’d found my perfect string, but I’ve played with RPM Power for the past year, I switched because I wanted more topspin, and I think I have now found my perfect string.’

At 1.85m (6ft 1in), Thiem is of average height in the tennis world, but for much of his junior career it was thought he would end up well below that. He was one of the smallest juniors, but at age 14 and just 1.60m (5ft 2in), he was taken for a test to see how tall he would grow. Some bone was taken from his wrist, and it was predicted – counterintuitively at the time – that he would reach 1.85m. That’s what he is today.

Again, it was a case of being patient – not something you’d expect from a man who hurtles down a mountain on in-line skates. But that patience finally bore fruit when Thiem’s greater fitness saw him through a five-set final against Alexander Zverev to win the US Open. All those missed backhands in juniors were finally worth the wait!