The “next generation” has been eagerly anticipated for years – but now one player is breaking clear of his contemporaries and making the most emphatic statement in tennis for 17 years. His name is Carlos Alcaraz.

At 18 you have your whole life ahead of you, but at the same time you live with urgency. You can’t wait. You want it all. And you want it now! The Spaniard’s teenage years won’t end until May 2023, but already he has made the most remarkable statement on the ATP tour. At the Madrid Masters in early May, he did something no-one had ever done before – beaten both Rafael Nadal and Novak Djokovic at the same claycourt tournament. But that was just one of many achievements that week.

On the Thursday, Alcaraz celebrated his 19th birthday by beating the ninth seed Cameron Norrie in three sets. A day later he beat his hero Nadal, also in three, avenging Nadal’s crushing victory a year earlier on the same court the day Alcaraz turned 18. When he then went a set down to Djokovic in the semis, the efforts of the past week could have caught up with him, but he rallied to win 6-7 7-5 7-6 in three hours 35 minutes. And then he beat Alexander Zverev in the final 6-3 6-1. Tiredness? – when you’re young and winning, you don’t feel tired. 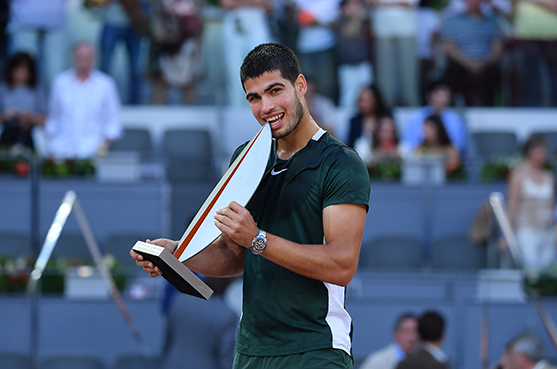 It’s not as if that was a one-off. Alcaraz had already won three titles before setting foot in the Spanish capital, one of them on the hard courts of Miami. All of which rings a lot of bells from 17 years earlier.

In 2005, an 18-year-old Spaniard took the tour by storm, winning titles in South America, missing out on the Miami title by just a couple of points against the runaway world No 1 Roger Federer, and then storming through the claycourt season to win his first Roland Garros title just after turning 19. His name: Rafael Nadal.

There are a lot of parallels that go beyond the two men’s nationality.

Ask Alcaraz where he sees himself in 10 years, he replies, “I hope to be fighting to win many Grand Slams and fighting to be number one. To continue playing with the same enthusiasm as when I was 18 years old.” Remind you of anyone?

In a world – the world of sport – where the hunger for new figures is inexhaustible, Alcaraz is facing something rare: everyone in Spain, indeed globally, has their eyes on him, and already they’re comparing him to the legend that is Rafael Nadal.

So is being compared to Nadal pressure or motivation? “Neither,” says Alcaraz. “I know that there will never be another like Rafa in history. I am Carlos.”

“I am Carlos” sums up the conviction of a man who has his own stamp. His forehand is blinding, with that excessive power that is the hallmark of the new generation, but with flexibility and precision. His backhand, especially when the ball is passing him, brings back memories of that same stroke in Nadal, even though one is right-handed and the other left-handed. 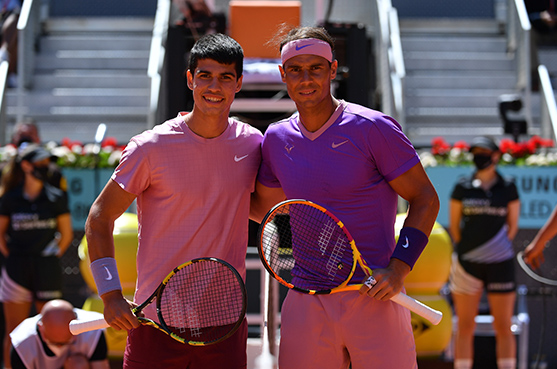 He knows how to throw in drop shots with mastery, he has a secret weapon in the lob, and he is strong and decisive on the court.

It’s worth listening to what Nadal said, even before Alcaraz’s surge into the top 10 in the first half of 2022. “I really believe Carlos is going to progress quickly. He is a complete player. I mean, he’s brave, he’s able to go to the net very often, great forehand, great backhand.”

A recipe for success

“When you make a salad and you are putting ingredients inside the salad, he has plenty of ingredients to become a great player. That’s the main thing.”

Alcaraz recalls signing his first contract with Babolat in 2013, when he was just 10 years old. He played for nine years with the same model, the Pure Aero, and recently switched to the precision focused Pure Aero VS. “I wanted a little more control,” he says, “and I saw that this racquet had one more string and I wanted to try it. I liked it and decided to change. I like it a lot because the ball comes off the strings fast and at the same time I have confidence and control.” 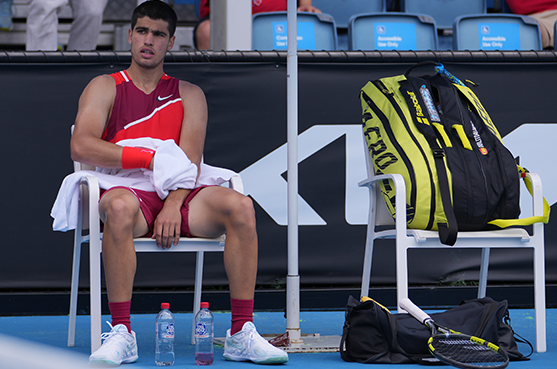 Fast balls with confidence and control – a good description of Alcaraz’s tennis. Not all of it comes from his Babolat racquet, another factor is his choice of Babolat strings, the RPM Blast. And of course there’s the man himself.

Not long ago, he was the youngster with the memorable 18th birthday, one of several promising players in their late teens or early 20s. Now that seems a distant memory. Alcaraz is the man to beat, arguably the best player in the world, even if the rankings take a while to reflect that. A man who most players will say it’s better not to have on the other side of the net.

Asked what his favourite song is, he replies, “The Eye of the Tiger.”

They’re the kids in America