Check Out The BPKL Paddle Range

When Babolat CEO Eric Babolat green-lit the pickleball project a few years ago, he issued a challenge to his team to enter the sport boldly, be authentic and “never boring” while creating a culture within the pickleball community that is easily identifiable.

The RBEL and RNGD paddles are recognizable from across the court, with their vibrant colors and dynamic designs. Each of the paddles flashes a bright yellow edge guard unique to BPKL, with the RBEL paddles featuring a street grid of Lyon, site of Babolat’s headquarters in France.

Babolat is a brand for all racquet and paddle sports with equipment and gear for tennis, badminton, and the increasingly popular game of padel. Babolat has even made squash racquets in the past, so scheming on innovative equipment for a new sport was a welcome challenge for the oldest tennis company in the world, started in 1875 when Pierre Babolat created the original tennis strings from natural gut.

“The first thing is that we deliberately avoided saying, ‘We are Babolat’,” said Guillaume Diard, co-leader of the Babolat pickleball project. “We could have taken that approach, but even though we have this history going back to 1875, we are new to pickleball, so we knew we needed to be humble and learn and respect the sport. We listened. We learned. We asked questions. We proposed ideas. And it’s starting to pay off.” 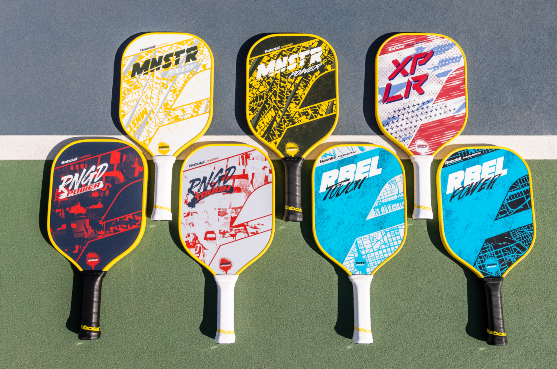 Retailing for $119, the RBEL paddles feature a poly Honeycomb core and graphite-skin-composite hitting surface for explosive power and pinpoint accuracy. The heavier weighted 8.1-ounce RBEL Power paddle is for the player seeking power and stability. The lightweight 7.6-ounce RBEL Touch allows for a softer feel and quicker hands to generate power and keep up with aggressive net play.

Retailing for $99, the RNGD paddles feature a poly Honeycomb core and a fiberglass dominant hitting surface. Both the RNGD Power and Touch are weighted the same as the RBEL paddles at 8.1 and 7.6 ounces. The RNGD Power’s 100% fiberglass surface is more flexible than carbon, to

create more power, while the RNGD Touch’s 35% carbon surface adds some spin to the paddle. The RGND Touch has been called the most universal paddle in the Babolat series, with one independent reviewer calling it “one of the best paddles I’ve ever played with” and a “10 out of 10” on his paddle rating scale.

The future looks bright for BKPL as the anxiously anticipated MNSTR Power and Touch paddles will be released in the summer of 2021. Retailing for $139, the MNSTR Series will be a composite of 80% carbon and 20% fiberglass, allowing for the most spin generation of any BPKL paddle. Babolat’s engineers also included SMAC, an aerospace technology the company utilizes in high performance tennis racquets. SMAC technology reduces vibrations and dampens ball impact, resulting in the largest effective sweet spot and best feel and comfort compared with the other paddles. The XPLR will retail for just $79 and offers all-around performance for the entry-level player.

Babolat’s popular tennis shoes have carried over to the pickleball courts. Worn by pros and national champions, Babolat shoes include the best-selling comfortable SFX3 and the lighter, sleeker JET Tere. Both models retail for $100.

Babolat wants the player to decide: Are you a RBEL, RNGD, or MNSTR? With eye-catching designs featuring a moisture-absorbing grip and shock-resistant bumper, Babolat’s new paddles bring energy and vitality to the ever-evolving sport of pickleball.